The ‘Elegant Junk’ Op Shop had operated on the corner of Morris Road and Main Street Upwey for a number of years. It was sponsored by the Shire of Sherbrooke and managed by Pam Russell. Profits went toward community projects.

Pam Russell’s words came as such a shock! Elegant Junk was to close!!!!

Kathy Walls and I (Kate Fisher) exchanged glances – Kathy had worked there for such a long time and I had worked there too, so we were puzzled. We knew that Pam’s husband was not in good health and although sales were not all as good as they should be, Pam would be released from her worry of managing Elegant Junk with the Shire of Sherbrooke’s approval. So she closed the shop.

Kathy approached me and asked me to take over the shop so we could continue working together, adding that she would be lost without something to do with her time. She had been a volunteer ever since her husband had passed away. I thought the shop was a good idea but also thought we needed some sort of Charity to support. We also needed some sort of sponsor for the venture. It was then that I thought I would approach the Belgrave Uniting Church, Parish Council.

At this time (1994) the Tecoma Uniting Church property was being redeveloped and this was a large expense for the Parish and meant there was a big debt on the property. A large hall, new kitchen, inside toilets, meeting rooms and office space were proposed with large car park and roadway into the retirement villas on the rear of the property.

Kathy knew the owners of the block of shops on the corner of Morris and Main Roads Upwey, Dianne & Michael McInerny so she approached them to get their approval for the new Op Shop.

The Treasure Shop was opened in the corner shop in September 1995 and Reg Morris constructed an A frame sign (which is still in use) and this sign became the pointer for many bargains for the locals and their friends. The initial loan was repaid in 3 months.

The corner shop worked well for a couple of years until we had to move into the second shop in Morris Road because another lessee wanted to lease the corner shop. This meant that new and second hand shelving had to be constructed for the new shop in a hurry before the move could take place. 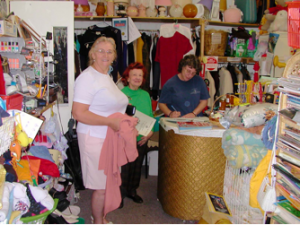 The shop was small, but we were allowed to use a storage shed associated with the third shop in Morris Road for the storage of excess goods that were to be sent to Missions, as well a goods stored for Summer or Winter use.

During 2002/3 the Tecoma Uniting Church Council proposed that we buy the third shop in Morris Road as it was on the market for about $65,000. Much discussion and various calculations were undertaken to see if it was a viable proposition. It meant that TUC would have to borrow the purchase price from Synod and gradually repay the debt from a slightly increased ‘rent’ on the Treasure Shop. It was quite a sound economic proposition and if anything happened which resulted in the closure of the Treasure Shop the building could always be sold to recover the debt.

Unfortunately the arguments against the purchase, prevailed, and the proposal had to be abandoned. Increased debt was not appreciated nor was the feeling that owning the shop would tie people to continued operation beyond what they thought a reasonable time. In-hind sight, the manner in which property prices spiralled up in 2003/4 would have meant the property would have been a very valuable asset for the church.

Local people bring in their unwanted goods to the shop when they are clearing out and these are sorted by the volunteers. Some of the clothes go straight on the racks (if there is room) others go into bags for use later in the shop, some for Missions, some as rags for local garages and some for the RSPCA as animal bedding. Household goods are sorted, some displayed for sale, others boxed for Missions some straight into the recycle or rubbish bins.

The income from the shop has increased steadily from an average of $318 per week for the first year the shop first opened to $765 in 2005.

All the profits from the shop are donated to other causes. Local Community groups like St Johns Ambulance, CFA Fire Brigades, Angliss Hospital, Christmas Dinner in the Dandenongs, Council Youth Work and Cancer Council of Victoria to mention a few.

Tecoma Uniting Church receives donations for their Mission and Service Fund as well as funds for food vouchers for welfare of individuals seeking help from the Minister.

One third of the profits go directly to Uniting Church Missions in various parts of Victoria, Australia, and overseas. Over the ten years of operation to the end of 2005 the following donation have been made.

The Treasure Shop operated in this shop until the end of 2004 when Dianne McInerny wanted to expand her Real Estate business that had moved into the corner shop.

The third shop had a great advantage of the storage shed. A fourth shop had been built in Morris Road and as part of this development the outside shed was enclosed under the roof and an access door direct to the footpath included to make the area more secure. The 3rdshop had a quite different configuration to the second shop so we had to rethink the layout.

After some discussion the Management Committee drew up a scale drawing of the shop and scale models of the existing shop furniture and racks. These were used to arrive at an optimum layout, which was proposed to all volunteers. Much discussion and various attempts were made to arrive at alternative layouts. Eventually a acceptable layout was agreed. New white melamine shelving was 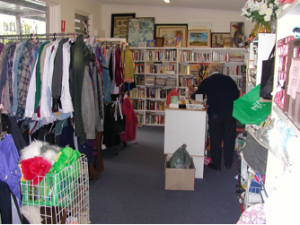 constructed, along with some second hand steel shelves from a shop in Belgrave. The shelves were manufactured over the January period of 2005 and the shop ready for occupation at the end of January. New window signage was completed as we moved. One Saturday most of the racks were shifted ready for business as usual in the new shop on Monday.

People have come to appreciate the warm welcome when they shop or donate goods. Our donations are always clearly advertised so all the community can see where their donations and purchase price go.

Members of Committee of Management. 2005

Volunteers working in the shop. 2006. 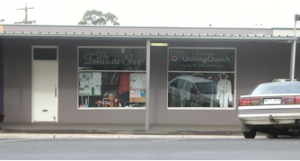 All this goes to show again,

“One person’s Trash is another’s Treasure”

Grateful thanks are extended to all who contribute in any way to the success of this venture in faith. 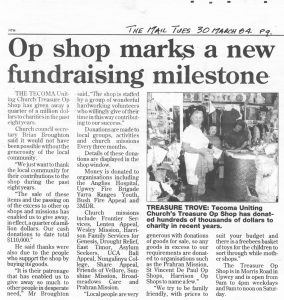 Quote: "We are not seeking uniformity, but rather unity which implies differences"
Richard Rohr

An aboriginal proverb: We are all visitors to this time, this place. We are just passing through. Our purpose here is to observe, to learn, to grow, to love... and then we return home. 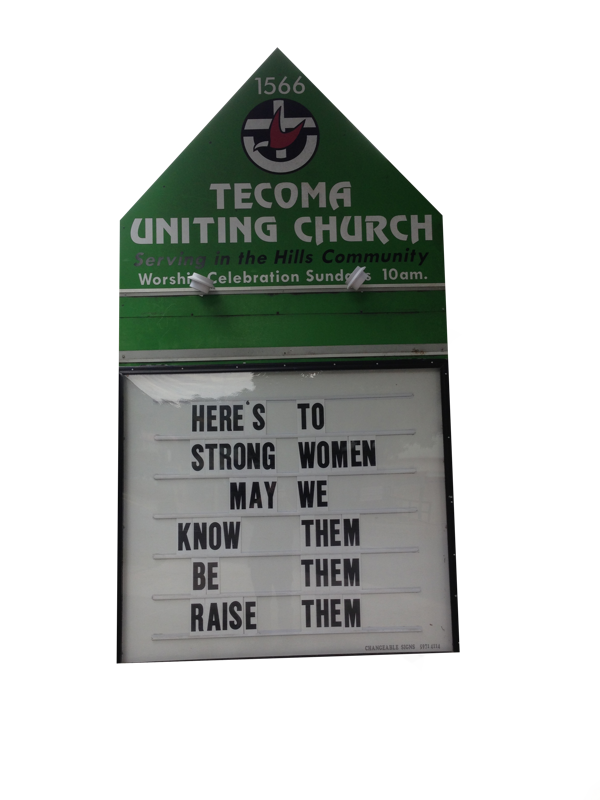